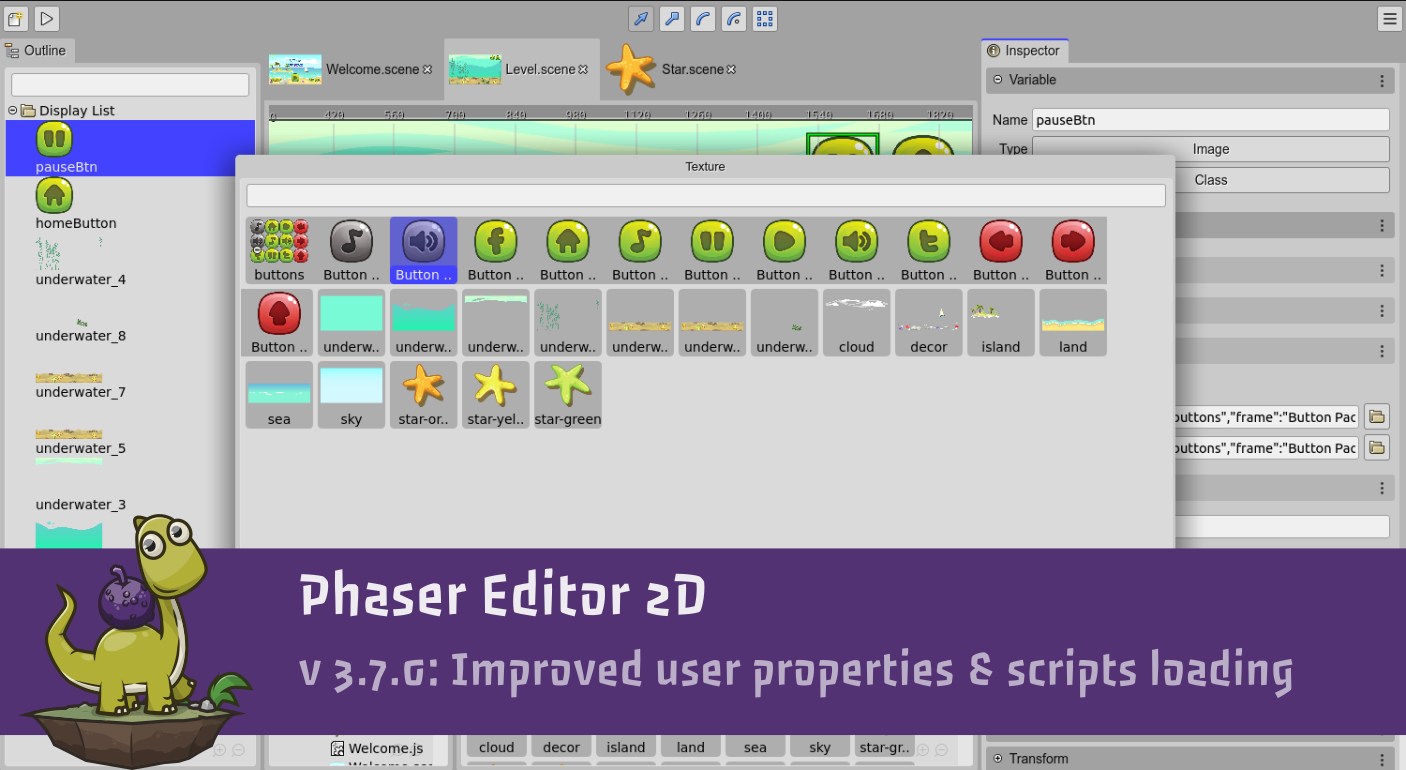 A new version of Phaser Editor 2D is available for download!

There are some interesting changes in this release. We increased the number of types supported by the user properties (i.e. the Animation Key Type). We added better support for loading the game scripts and we fixed several issues reported by the community.

User properties are used by the prefabs and the user components. The main advantage is that you can extend the game objects with custom properties that are shown in the Inspector. This means, that you can change the behavior of game objects straight in the Scene Editor.

Until now, you were able to create user properties with basic types like Number and String. However, in this new version of the editor, we added other types of properties to assist you in setting the right values.

We are talking about Asset related properties: 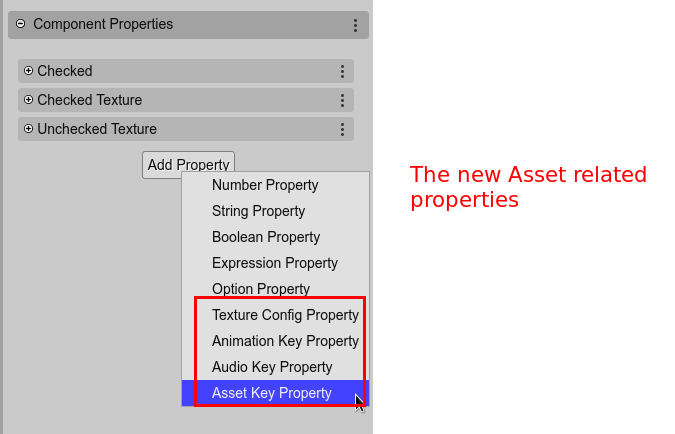 Let's say you created a Checkbox component to provides a checkbox-button behavior to a game object. The behavior is simple, when the object is pressed, it shows a texture with a checked appearance. When the object is released, it shows a texture that indicates the button is unchecked. To do this, we create the checkedTexture and the uncheckedTexture, both of type Texture Config.

When a property is of type Texture Config, its field-editor shows a button to open a Select Texture dialog: 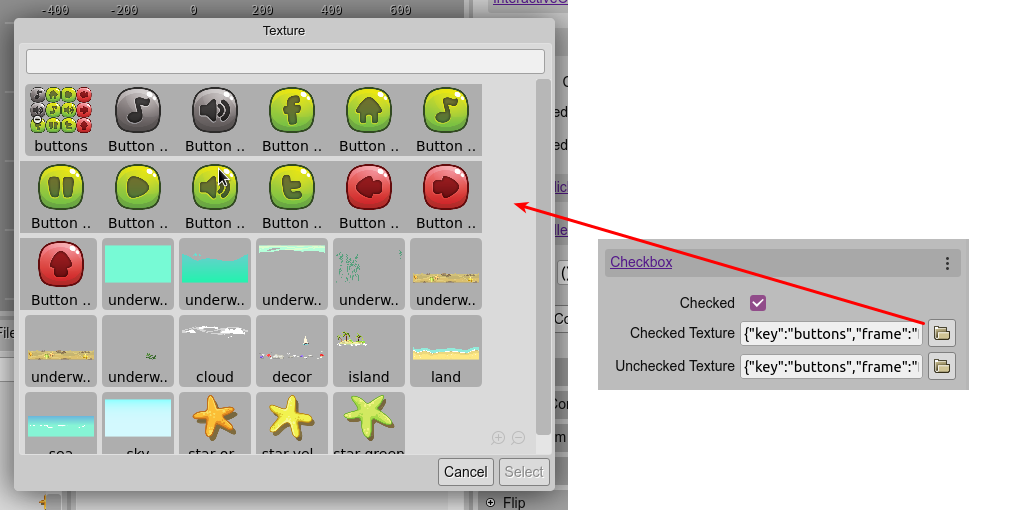 When you select a texture in this dialog (an image, an atlas or sprite-sheet frame) the property is set to its configuration:

This allows the user component to get that information and set the right texture into the object:

We encourage you to take a look at the One day in the beach demo we did. The checkbox-behavior of the Sound and Music buttons are implemented that way. It is also available as a project template in the Play Phaser Editor 2D service.

This type of property is just like a String property, but it shows a button that opens a dialog to select one animation key between all the animations defined in the Asset Pack file. Very similar to the Animation Key property, but it shows a dialog to select one of the audio keys defined in the Asset Pack file. This is a general type of property that shows a dialog with all the keys defined in the Asset Pack files of the projects: Changing the type of a user property

Maybe you are working on a project that uses user properties in prefabs or components. However, maybe one of the new property types introduced in this version fits more for some of the properties. In that case, you can convert the properties to the new type: 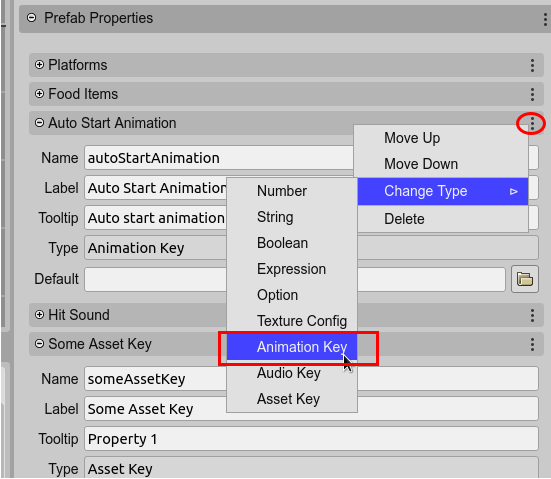 However, Phaser provides a way to load the scripts in the same way you load any other game asset. This has the advantage that you can add the scripts of your game to an Asset Pack file and use the Asset Pack Editor. It also is useful if you have a lot of scripts (like compiled levels or prefabs), and you want to load them by demand or show the progress of the loading.

Until now, you were able to do this by adding Script files to an Asset Pack file. This has the inconvenience that the scripts are executed in any order, and it creates problems when one script depends on another script that is not loaded or executed yet.

To fix this, in Phaser there is the Scripts file type (note Script != Scripts). It allows you to load a couple of scripts but execute them in the specified order. For example, if you have a prefab variant B that extends a prefab A, then you can load them using the Scripts method and placing A before B: 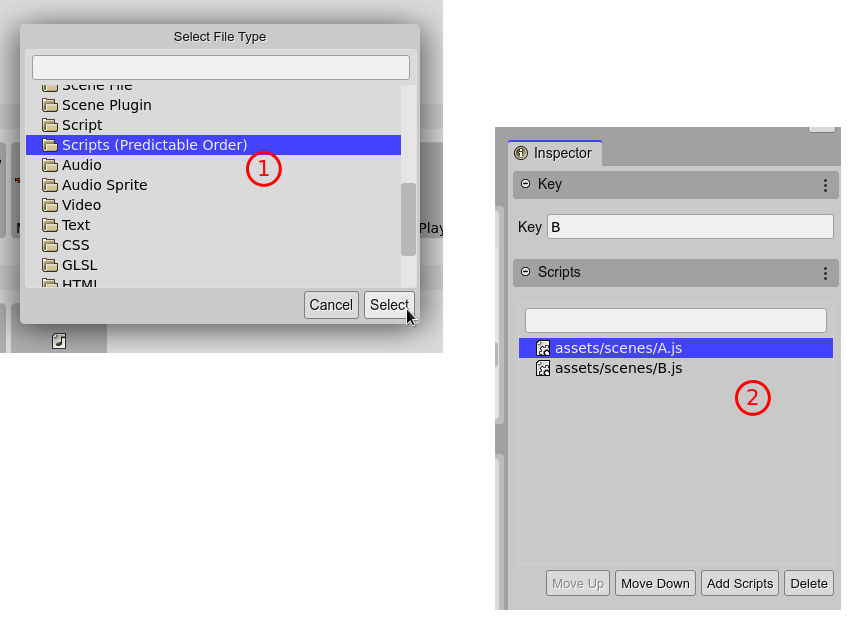 Other changes and fixes

This release was all about fixing bugs or adding new features. All reported by you. For us, your feedback is extremely important and has a high priority.

Like we commented in the previous release, our next big task is to add support for tilemaps in the Scene Editor. We are not going to implement a tilemap editor (not for now), else we are going to allow you to import a third-party map into a scene. A third-party map supported by Phaser, like those created by Tiled.

By the way, SuperTommy, from Ourcade (a website full of updated Phaser courses, tutorials, and videos), is cooking something related to the editor... That's such exciting!

(We are following them at @OurcadeHQ)