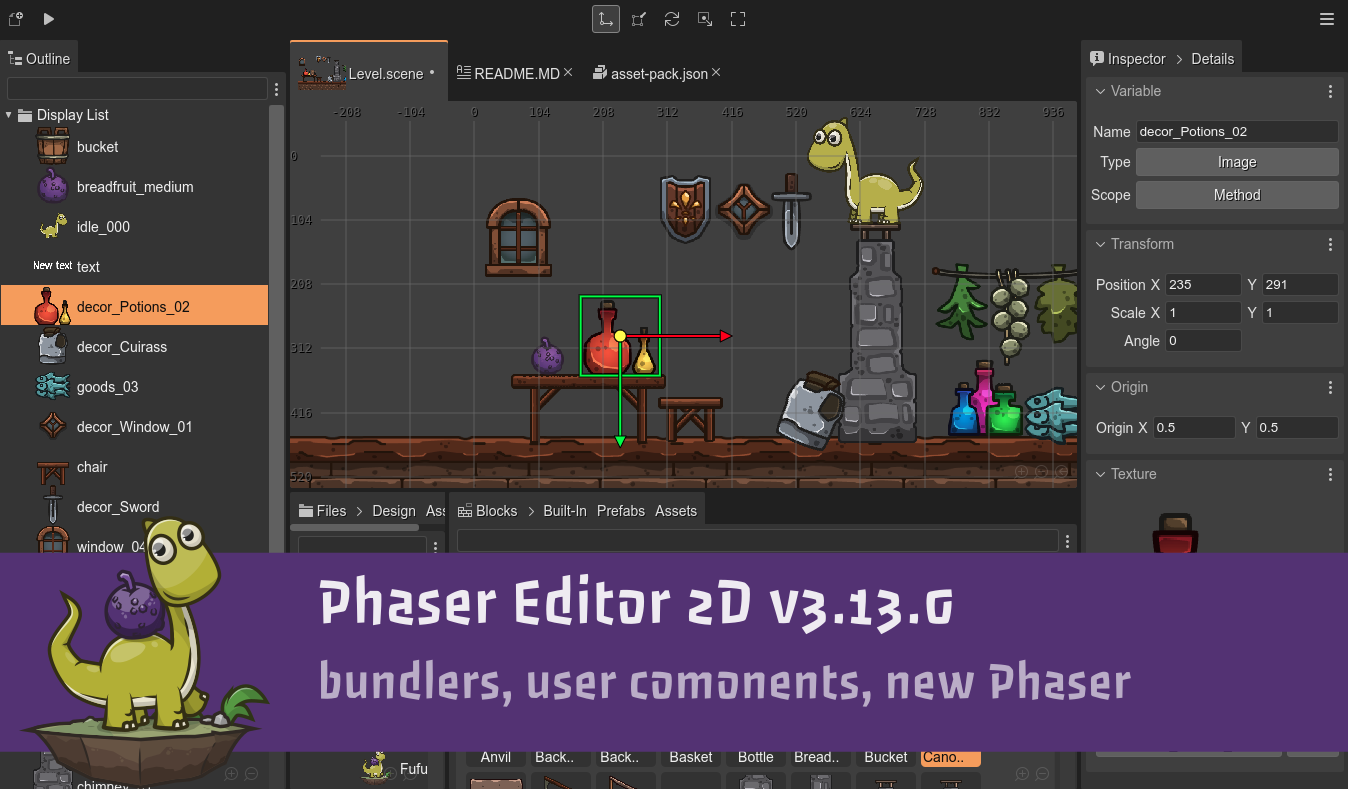 A new Phaser Editor 2D version is ready for download!

This is a small update, but I'm particularly happy with this version. It introduces changes that remove some friction when you start with the editor. I'm talking about the new project templates for Webpack and Parcel. The new settings for compiling the scenes and user components to ES modules. And a new helper class for user components.

If you are creating games, tutorials, or any other content (no matter if it is your first project) with Phaser Editor 2D, please tell me, and I will be proud to feature it in the website, newsletter, and social channels.

Using the Component Pattern with Phaser 3.50+

Tommy Leung from Ourcade.co is making a new tutorial series about the Component Pattern. It is not about Phaser Editor 2D but it explains basic principles about the Component Pattern and how you can use it in your games. In Phaser Editor 2D the component pattern is a central concept, so I think this tutorial can help you in making better use of the editor.

Need a better way to organize and reuse logic in your game? Then the Component Pattern may be what you are looking for! We go over a Unity-inspired implementation for use in Phaser 3.50+ and typescript.

I'm very pleased to include in the editor better support for developers using Webpack or Parcel.

That was an old request, but is better now than never!

Now, when you open the New Project dialog, you will see there are two four new templates, grouped in the Webpack and Parcel folders: 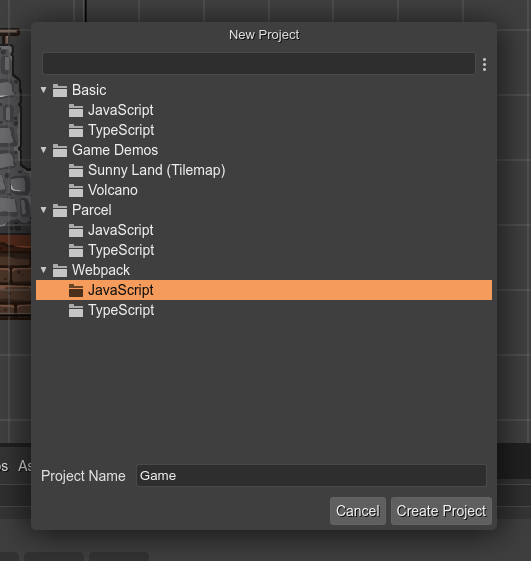 You can create a JavaScript or TypeScript project with Webpack or Parcel.

Side note: Phaser Editor 2D allows editing JavaScript files using the Monaco editor. It is fine for basic project structures, but not for Webpack or any other bundler-based project. I always recommend using Visual Studio Code for editing your JavaScript/TypeScript files.

Phaser Editor 2D integrates with VS Code by default. You can launch it with the Ctrl+Alt+U keys. Also, you can open the active scene in VS Code with Ctrl+Alt+E.

Just read the README file included in the project when it is created. It shows the instructions for compiling and testing it.

The Parcel project template is a fork of the phaser3-parcel-template created by the Ourcade team. I hope it will help you on following the amazing tutorials they are making and apply your learnings to Phaser Editor 2D.

Phaser Editor 2D uses Asset Pack files for importing the assets in the projects and loading them in the games. Each file configuration has an URL field that points to the file. The editor computes that URL automatically, by taking the relative path of the file, starting at the root of the project.

That works if the root of your project is the root of the website. However, in Webpack (and similar), you can use a very different project structure, and store the assets in a folder that is not at the root of the project.

For this reason, now the editor supports changing the public root folder for the asset packs. It is very simple, just create a publicroot file in the folder that will be at the root of the website: 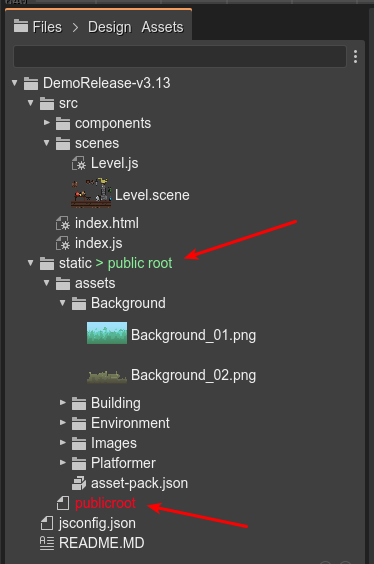 The Webpack and Parcel project templates provided by the editor are well configured, so you don't have to care about it.

There are two new parameters for the scene compilers: Export Class and Auto import.

When the Export Class is on, the compiler includes the export default modifiers in the scene's class declaration.

When the Auto Import parameter is on, the compiler looks for the classes used by the scene and generates the import statements. The compiler only knows the types it generates, but if you use other types and elements in the user code sections, then you have to import them manually:

These parameters are also present in the User Components Editor, and it works the same. The component compiler automatically exports and imports elements of ES modules.

A base class for your components

If you are using User Components in your projects, then you may use a common class for all our components. Or for most of them. This base class registers listeners to the Phaser events and call special methods that are overridden in the derived classes.

In this version, the editor proposes you use a base class for your components, which may be useful for the majority of the cases. This class is named UserComponent, and you can add it to your project with a single click.

In the User Components editor, open the context menu and select the Resources → Create UserComponent.js:

Look there are options for generating the file with an ES module format, JavaScript, or TypeScript.

You only need to generate this file once. Then you can use it in your components, setting the Super Class parameter to UserComponent.

The UserComponent class is very simple. It listens to different Phaser events and call the correspondent method: awake(), start(), update(), and destroy().

User components can listen to Phaser events for implementing a particular behavior. One important event to catch is when the component "starts". That event is emitted in the next scene update. However, you want to execute an initialization routine right away after the component is created and all its properties are set. It is not possible by listening to Phaser events.

In this version, the Scene compiler generates the code to emit the components-awake event. When you implement a component, you can listen to this event and perform your initialization routine.

If your component extends the UserComponent class, then the only thing you have to do is to implement an awake event:

Learn more about the awake event

The scene compiler now generates class fields instead of constructor initialized fields. Maybe that code is not compatible with all browsers. If you are making professional games, I recommend using a build tool like TypeScript, Babel, Webpack, etc...

The scene compiler generates all the "creation" code inside a create method. The Method Create parameter of the scene settings allows changing the name of that method. Before, it has the create name by default, in concordance with that special method of a Phaser scene. However, many of you get confused the first time you want to add custom code to the "create" method.

In this release, the Method Create parameter has the editorCreate value by default. And the compiler, the first time generates the scene code, includes a "create" method in the user code. This means, that now you can add custom code to the create method. Something like this:

The Create Method parameter of the scene settings allows changing the name of the method generated by the scene compiler.

Take a look at the complete CHANGELOG

The next in line is the support of nine-slice objects! I'm delayed with the Phaser Help Center, but... did you see the new docs from Phaser? It improved a lot! Take a look: