A new version of Phaser Editor 2D is available. This v3.20.0 is very important, it introduces a new feature: the nested prefabs. That's a game-changer feature, but it is not the only one. It has a re-worked prefab and user component event handling. And we started a new project, the Phaser Editor 2D Extras. It is a set of plugins with support for third-party game objects, like the NinePatch.

As you can see, the version number jumped from v3.15.0 to v3.20.0. The reason is the new changes are huge and introduced some backward incompatibilities. Please, if you are working on older projects, read carefully these release notes.

In previous versions, the editor used the prefab-awake and components-awake custom events for "awaking" the prefabs and user components.

These events were used for notifying prefabs and user components that all properties are set by the code generated by the editor.

So, when the editor generates the code of a scene, it also generates code for emitting these events at the end of the initialization of each object.

In this release, I removed the prefab-awake and components-awake events. Instead, the editor generates a scene-awake event at the end of the editorCreate() method. It is a simpler solution and works the same! It has the advantage that the code is a lot cleaner. It doesn't require generating a lot of lines for code for emitting all the prefab and component events. Also, it is more consistent with the other Phaser events, like the UPDATE event: it is emitted by the scene and not by the objects.

Let's do a comparison:

All code for emitting the prefab-awake and components-awake events disappeared. Now, right at the end of the method, it fires a scene-awake event.

Migration to the scene-awake event

You can migrate your code to this new version following these steps:

You can enable the Generate Awake Handler parameter of the prefab settings and the scene compiler will generate the code for registering the scene-awake handler:

Implementing the awake method is your responsibility.

Welcome nested prefabs! This is a largely awaited feature. Never a user requested it, but I found so many times in a situation where nested prefabs are the "perfect" solution that I was desperate for implementing it.

A nested prefab is a concept I borrow from the Unity 3D engine. In few words, it allows you to change the children of a prefab instance. For example, a button prefab may be composed of the background image and the icon image. If you publish the icon image as a nested prefab, then you can change its texture in the scene.

The next image shows an AlienShip (Container) prefab. The alien and ship children are both nested prefabs: 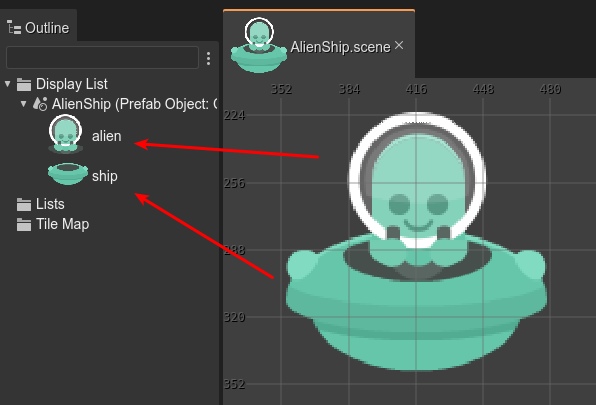 For publishing an object as nested prefab just select the Nested Prefab option in the Scope parameter of the Variable section: 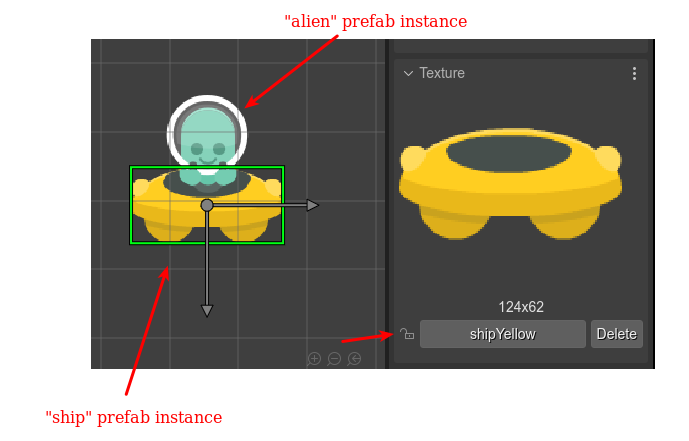 The code generated by the scene compiler looks like this:

Look the "ship" object is an attribute of the "alien1" prefab instance.

There are many other details about the nested prefabs, I invite you to learn them by reading the documentation.

Also, I recommend you to open the nested-prefab-demo project of the Phaser Editor 2D examples. For now, there is only one example, but I plan to add more :-)

If nested prefabs is a feature that you never requested, the nine-patch game object support is a request from the first day of the first version of the editor.

Nine-patch objects are not part of the Phaser API, and the philosophy of Phaser Editor 2D is implementing only the official Phaser API. However, the guys from the Club Penguin Rewritten (our bigger backer) asked for it some time ago, and finally, I had the opportunity to implement it.

For making it compatible with the editor's philosophy, I created a separate project, the Phaser Editor 2D Extras. The NinePatch game object support is part of it. Please, follow the instructions in the repository for installing it and work with the NinePatch object.

There is a new Children properties section. It is shown when a Container or a Layer game object is selected in the scene. It has the following properties:

These parameters are not part of the Phaser API. It is related only to how you can use the scene editor.

I'm very pleased with this release. I was publishing pre-releases and I like that method because some of you who are in constant contact with me on the Discord server and the Github issues can test the new changes, and provide me invaluable feedback.

Please, if you find some issues with the new changes, contact me.

I'm excited about the next release. The plan is to re-think how the editor is distributed and integrated with your toolchain. Right now, there is the Server & Desktop distribution and the Desktop (ElectronJS based) distribution. Do you understand well what is the difference? Sometimes I don't.

For the next release, I want to change how the editor is distributed. Later, I will share with you more details. For now, I can tell you that I will make a core distribution and an all-in-one distribution.

The all-in-one distribution will be based on ElectronJS and will have a deeper integration with the operating system. It will include the Monaco plugins for editing JavaScript. And some offline project templates. It is the solution for those who are looking for an experience closer to traditional game development.

Actually, I plan to integrate the editor with Gitpod.io as a better alternative to the current online Play Phaser Editor 2D service.

The core distribution is the solution for those looking for an experience closer to modern web development. I think, most of you who are making professional games will go with this one.

Also, I will implement an online Marketplace for project templates, plugins, assets, tutorials? The first version will be extremely simple and probably not open for third-party content, but it is just the start. I think having an online marketplace will allow us to add more content for learning Phaser Editor 2D. And will add visibility to more content related to the editor.