A new version of the editor is ready! And this one is important. A lot of bug fixes. Some nice improvements, especially for the macOS/Safari combo. Native support for Apple M1. New features, like the new Scene Key and Object Reference user property types. And... the integration of Phaser Editor 2D All in One with the Phaser Editor 2D Marketplace!

A new tutorial from Weveana (in Spanish)!:

They have more introductory videos about Phaser & Phaser Editor 2D game development listed in the channel.

A lot is happening on our Discord server. Join us for collaboration. Ask questions or tell us your ideas. Your feedback is highly appreciated and is very important in the process of providing a more friendly and stable IDE.

Phaser Editor 2D All in One & the Marketplace

In this release, the Phaser Editor 2D desktop edition (aka All in One) connects to the Marketplace and shows you the Starters templates & Example templates. So you can create a project based on those templates right away.

Now, when you click on the New Project button, it shows a page with the built-in templates. These templates are included in the software and are available offline. 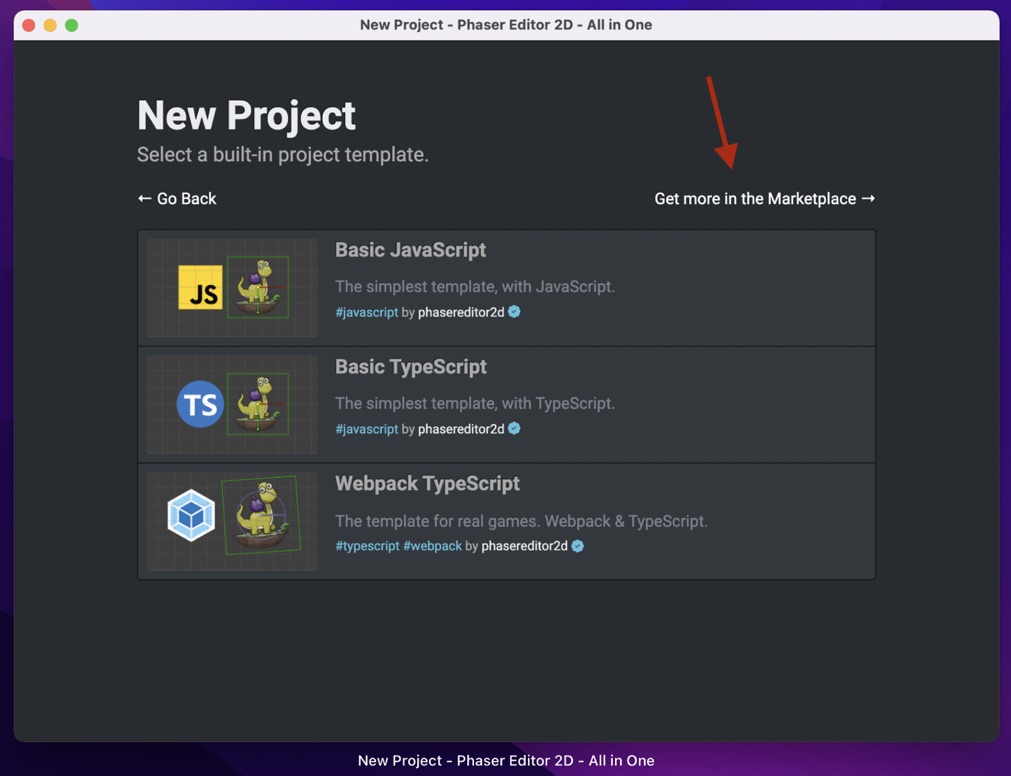 If you click on the Get more from the Marketplace link, it shows you a page with all the marketplace templates: 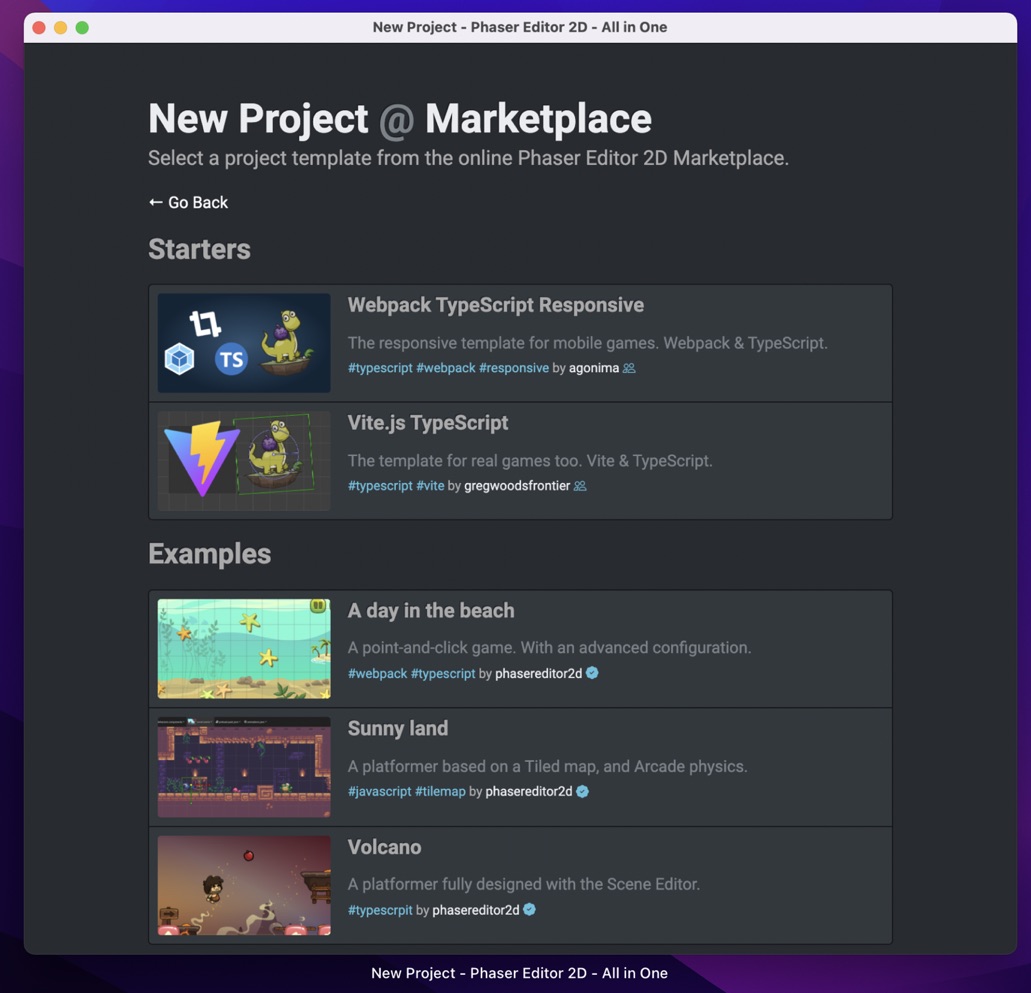 If you are a previous user of the editor, you can see the examples are not available as built-in templates. I moved them to the marketplace and you need an Internet connection for getting them.

However, the marketplace templates are downloaded and cached to your local machine. You can find that cache in the ~/.phasereditor2d/all-in-one/cache/location.

The bigger template has 3MB, so if you have a slow connection it can take a while for downloading it the first time.

By the way, you can download the whole marketplace and run it locally. Just create the $PHASEREDITOR_MARKETPLACE_URL environment variable and set it to the new marketplace URL:

I should write a tutorial about this. Did I mention you can add your content to the Phaser Editor 2D Marketplace? It is open to all of the community.

I should add some extra templates soon, for closing this marketplace task and focus on other new & bigger features.

We have now a new Scene Key user property type. As you may know, you can create custom objects (prefabs) and behaviors (user components), and define custom properties. In this release, I added a couple of new types of user properties.

This is the case of the Scene Key property type. Its primitive type is a String, which is a scene's key. But it also provides a button for selecting one of the project's scenes:

This user property type is very handy for making behaviors including scene switching.

How are you making associations between objects in the scene? The new Object Variable property type is for it!

Until now, it was possible to do this using the [Expression property type], which is a general-purpose type. But now, you can use the new Object Variable property type!

It is pretty similar to the Expression property type, but it also provides a button for selecting an object in the scene. 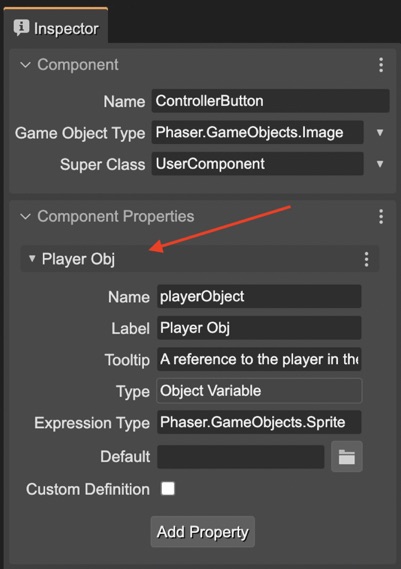 Look the Expression Type is Phaser.GameObject.Sprite. Youn can write there any other Phaser or user type.

Then, when you add that behavior to the button, you can select the player object and set it as a value: 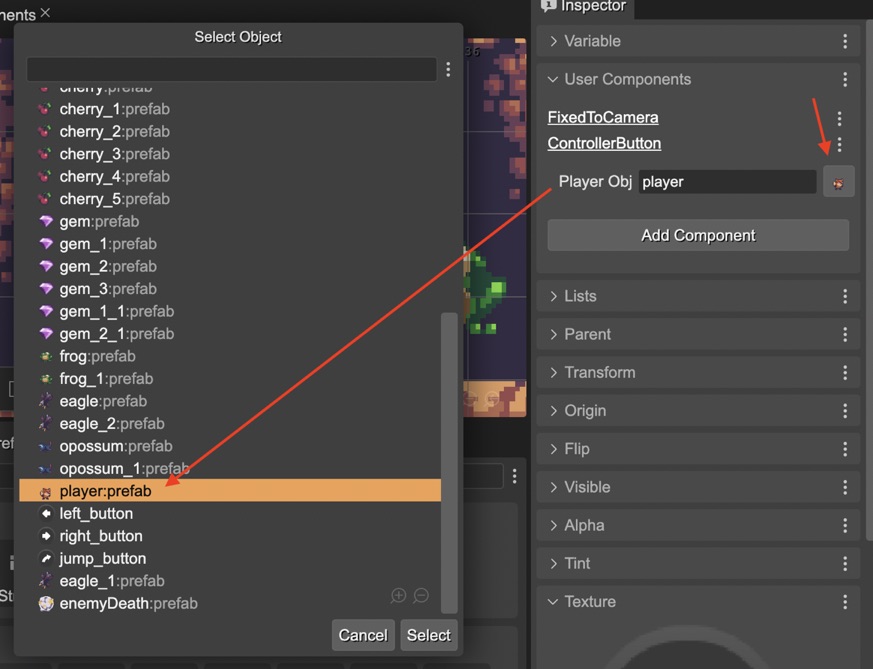 The value set to the property is a string, which is the name of the variable referencing the object. It is code-generated verbatim:

The new Color user property type allows you to select a color from a color dialog. The color value is set as a hex string. You can convert it to a different format using the methods of the Phaser.Display.Color class. 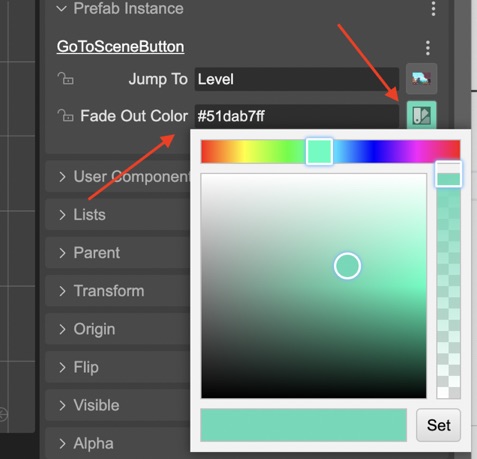 Phaser API provides a GameObject#name property that is not used by the API but is let to the user for using it as a metadata field. In Phaser Editor 2D, adding metadata is a matter of the user components. If you need to set a name to an object, you can create a Name user component. However, having this nameproperty available in the Scene Editor is an old request from the editor's users. So, I listen to you :)

In the Scene Editor, each object has a variable name. Now, if you enable the GO Name flag, the scene compiler will generate the name property and will use the variable name as a value:

Now you can paste objects in the scene but at the same original position. Select that option in the Scene Editor's context menu, in the Edit section. Or you can type Ctrl+Shift+V.

Launching Visual Studio Code as an external editor in macOS

A bit late, but finally it is here. Importing hardware from Cuba is a nightmare, and in the middle of the pandemic, a proof of patience.

If you are running an Apple M1 powered device, then you can download the binaries:

In the past year, I decided to do some client work, for two reasons: for increasing my income & for getting some experience making professional games. In a certain way, I did it. I was rejected in so many interviews for game development positions. Yes, making tools is not the same as making games. But finally, I collaborated with a team for making a game (or an app with gamification) for kids. It was a very nice experience, especially because I built everything with Phaser and Phaser Editor 2D :) At the same time, the editor got some new enterprise clients, and it added stability to my income. The thing is that now I'm in a position where I can dedicate more time to the editor. No more client work for a while! Yet, I want to make some games of my own. I have some ideas I want to try.

So, the good news is I will have a lot more time for the editor. I think this release is proof of that, right?

For the next release, I want to add a bit more content to the marketplace, maybe a CapacitorJS template, or a template about Facebook Instant Games. Hey! You tell me, what kind of templates would you like to get in the marketplace?

But there is something I want to work harder on. A new Script game object. User components and prefabs are powerful, but they are attached to a single object, and sometimes you need to create independent behaviors or create more complex relationships between behaviors & objects. As soon as I get it more clear, I will write a post about it.